The Coaling Jetty was constructed as part of the Battersea Power Station. As the name infers the Coaling Jetty received the coal from barges, known as Flatirons, on the River Thames. Coal was then transported via cranes, hoppers and a series of conveyors to the Boiler House. The jetty also supported a grid screen to protect the water intake chambers from foreign objects.

The Coaling Jetty is 133m long and 11m wide. It was constructed from reinforced concrete and built inside temporary cofferdams. The deck is divided into four sections, the two central sections have larger spans designed to span over the two proposed intake chambers. Ultimately only one of these intake chambers was constructed with the first half of the power station and the second was not built.

The Coaling Jetty columns are supported on block reinforced concrete foundations which bear on the London Clay. The columns are braced and laterally strutted to resist loads from mooring vessels. The beams were designed for the longitudinal pull imposed by a vessel mooring. fenders protected the structure from impact.

The cranes moved east-west along rails set on the concrete beams. Each crane could unload up to 240 tons of coal per hour.

In 2014 the cranes were dismantled and transported by barge to Tilbury Docks.

Duncan Pickard has led the creation of the Coaling Jetty space. The planning description of the project was to "use of the jetty as a flexible Class A1-5, D1, and D2 space to facilitate public access and pop-up events, exterior works including the installation of decking, two bridges, and the erection of a balustrade and associated works for a temporary period of three years".

The Interim Coaling Jetty project was fast paced with design starting in January 2019 and construction completed 19th July 2019. The works include:-

One of the most challenging aspects of this project was lining up all the approvals from different statutory bodies: 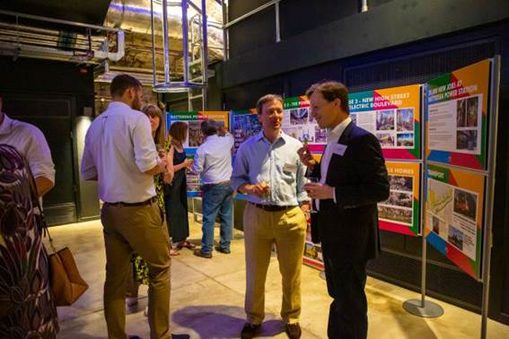