Carrington Power Station is a Combined Cycle Gas Turbine power station, which was completed in Autumn 2016 and began commercial operation on 18 September 2016. It is located on the site of a former coal-fired power station, close to the villages of Carrington and Partington in the Greater Manchester Area and 12 km southwest of Manchester City Centre. The Manchester Ship Canal and the River Mersey run alongside the site, in Trafford, Greater Manchester, in North West England.

Because the station's site was surrounded by water on two sides, its strata were variable and so all of the buildings' foundations were piled. Approximately 7,850 piles were made, all of reinforced concrete construction, with an average length of 30 feet (9.1 m) and with a load of 50 tonnes per pile. The station's main buildings consisted of a turbine hall, boiler house and a pair of chimneys. Other structures included workshops, storage areas, a canteen and office block buildings. The approximate dimensions of the main buildings measured 480 feet (150 m) by 275 feet (84 m). 10,300 tonnes of steel was used in the main buildings' steel frame, erection of which began in November 1949, and the construction of the superstructure beginning in December 1950. The steel frame was clad with brick, while copings and cills were made from artificial stone. The station had granolithic flooring, but the turbine hall and boiler room floors were tiled. The roofs were made from reinforced concrete with glass glazing. Two elevators were provided, to give access to all floors. The station's two chimneys were each 350 feet (110 m) high and of brick construction. Ten million bricks were used in the construction of the station.A gas-fired Combined Cycle Gas Turbine power station has now been built, utilising the same site as the original coal-fired station. Bridestone Developments constructed the £500 million station, which is capable of generating 884MW of electricity (at an 58% efficiency rate); enough power to supply a million homes. Irish utility company ESBI purchased an 85% stake in the project from Carlton Power in September 2008. The station is also a combined heat and power plant, capable of providing nearby businesses with steam, if they require a supply. Bridestone were granted planning permission to build the station by the Department of Business, Enterprise and Regulatory Reform in July 2008. This meant the plans were not subject to approval from Trafford Council. Its construction began in late 2009, providing 900 construction jobs. 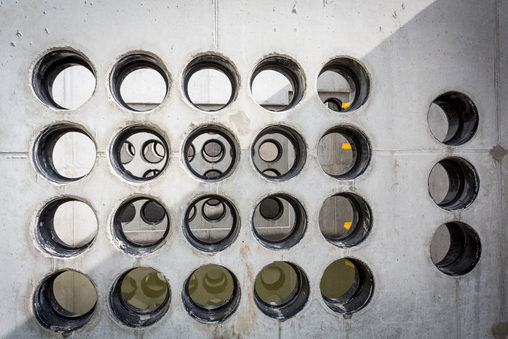