With a spire height of 140 metres (459 ft) and 40 floors, West Tower is Liverpool’s tallest building, the joint 24th tallest in the United Kingdom (third tallest outside London) and the joint 118th tallest in the European Union. The building commands views across the city, over the Mersey to the Wirral and as far as Blackpool on a clear day. The first five floors are the new headquarters for the Beetham Organization and the remaining floors, apart from the 34th, have been divided into luxury apartments and penthouses.

However, unlike St. John's Beacon, West Tower has no antennas on the roof. Therefore, when considering height excluding antennas, West Tower is the highest building in Liverpool.

The five floors of Beetham’s offices are set back between concrete columns and are fully glazed to provide an "animated façade"at street level. A glazed lift and stair serving the office are accommodated between raking fins with views to the river.

The 127 apartments are clad in a fully glazed perimeter curtain wall of random clear and opaque panels and are orientated to provide views of both the city and river. The upper penthouse floors are tiered back to incorporate external terraces behind glazed balustrade screens.

The 34th floor is home to Liverpool's highest restaurant, Panoramic. This floor is completely clad in a clear glass perimeter offering diners views of the city of Liverpool and further afield.

At the 4th Liverpool Daily Post Regional Property Awards in association with RBS, Beetham West Tower won Aedas the best Mixed Use Development prize. This prize was awarded for best use of land which would normally have stood barren; creation of an iconic building; and best use of limited space. 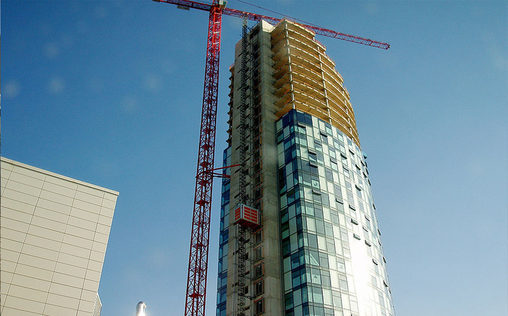